Starting the end of last week Facebook users can specify their gender and sexual preferences more precisely. The social network increased personal gender options to more than 50. Every FB-customer can identify themselves using more than one category, for example: Female, Cis, Cis Female, Cis Gender, Cis Woman, etc. At this moment this option can be used only by users with accounts in English version of social network. 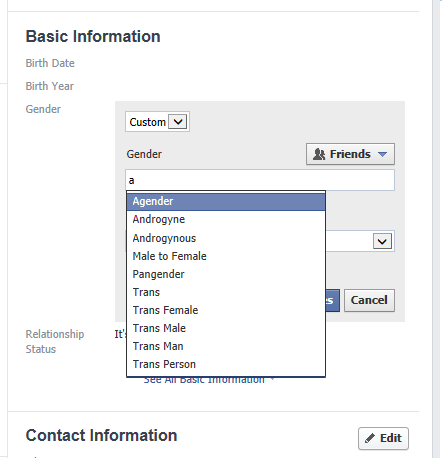 For example, Facebook offers a great choice for transgender: from trans - a general category that encompasses all transgender categories, to more meaningfull narrow categories, like trans -Female, -Male, -Man, -Person. There are also variants of genderqueer, genderfluid, non-binary, two spirit and pangender, and agender. Customer also can choose Intersex, Gender Fluid, Androgyne, Neutrois, Bigender or Neither.

Unsurprisingly, this improvement evoked a lot of criticism. One of the opinions suggest removing the gender and sexual preference information from social network completely. It would be much more honest, they proclaim. This change is definitely a politically correct novation, but it also may have been done to improve marketing part of the Facebook business (if a customer fills in all the lines in profile basic Information, Facebook can distinguish users into different target groups. This way it becomes much easier to offer relevant advertising). Another opinion suggests that it would be better not to give option Cis-gender, because this term is not regularly used by traditional sexual orientation and gender identity people and it may cause confusion, why they should identify themselves as Cis from now on.
Posted by Anti-discrimination Bagpack at Monday, February 17, 2014