How can language improve gender equality?

It is known that women face significant barriers when it comes to their equal participation in society, not only when it comes to work and wage, or in the political spectrum, but also, according to a new line of researches, due to language, as the structure of certain languages may shape gender norms, stimulating inequality, therefore limiting women's opportunities. Gendered languages can influence attitudes toward women, after all languages do reveal a lot about society since they show how communities observe the world, its individuals and the role that each one has in it. Usually, masculine forms are used to represent all human beings - this happens according with the traditional gender hierarchy, which grants men more power and higher status than women.

Since the 1980s, the European Parliament has been working to ensure that it uses a gender-neutral and non-discriminatory language, along side with many other countries that joined the "movement", trying to find a more gender neutral terminology, so it'd be easier to achieve gender equality among societies. This led some countries into reforming its language in order to be more gender inclusive - some languages have masculine and feminine genders for every noun, others have no grammatical genders whatsoever, and some have masculine and feminine pronouns because the nouns are considered "neutral", as explained next:

Grammatical Gender Languages, such as German, Italian, French and Slavic languages, attribute a grammatical gender to every noun, and usually the gender of the personal pronouns match the reference noun. With these languages, in order to not disrupt completely their grammatical structure, the solution is to use feminisation to make them more gender inclusive. Feminisation is the use of feminine versions of masculine terms, for instance the use of professional terms such as "doctor" and "surgeon" are masculine, but "midwife" and "nurse" are both feminine, which instigates discrimination, therefore, feminine correspondents have now been created for these masculine terms which can be used interchangeably. Following, an example in french:

These languages have no grammatical gender and no pronominal gender, which means they don't need to change their structures. Genderless languages include Hungarian, Estonian and Finnish.

This kind of language implies that there are personal pronouns for each gender (he/she), and the goal of natural gender languages is to reduce the use of gender-specific terms. For example, English terms such as "chairman", "policeman/women", "stewardess" and "headmaster/mistress" have been officially changed to "chairperson", "police officer", "flight attendant" and "headteacher", in order to empower gender equality. Natural gender languages include English, Danish and Swedish. Following, an example in English: 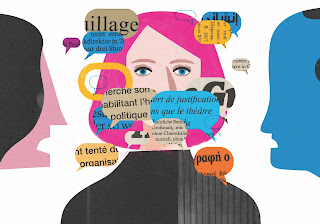 Over the years, studies have been done in English language to understand if gendered noun or gender-centric suffix such as -ess and -man had any impact on the way children (the target of those studies) think and see society, at they have shown that children were more apt to associate men to a profession with the suffix -man, such as "mailman", and women to professions with the suffix -ess, as in "stewardness". Based on these studies, we could argue that children may choose their future profession because of gender-centric professional titles, showing that, at least in this case, language may limit children's professional choices psychologically speaking. Although we have become more aware of how language can and does impact our lives, changing gendered words isn't an easy task because, as said before, in some cases it'd mean the whole structure of the language would have to change, as some not only associate all nouns with a gender, but also accompany indefinite and definite articles, associate adjectives, and past-tense verbs to gender.

Despite the various achievements made over centuries against gender inequality, this is still a problem that is very much present in our society, since factors such as culture, history, religion, traditional patriarchal societies, and many more, are its bases of support and what keep gender equality issues fueled; then language can't be removed from this list. It is believed it shapes how young girls and women perceive their educational, professional opportunities, and even how they position themselves about economic and politics. In countries which the dominant language is gendered, statistics show that fewer women work outside the house, a key of measure of women's financial independence and bargaining position withing the household, which reflects support of gender inequality in employment. Gender plays an important role in outcomes regarding education, pay and corporate leadership.

So, considering this, language does play a role when it comes to gender inequality, but as this issue becomes more clear and is credible as yet another factor in inequality and discrimination in regards of gender, the more countries are trying to find a way to change their languages' structure within what is possible, and so, as the time goes by, we adapt and make our languages more gender neutral, and this, consequently, will improve and help us, as a global society, to achieve gender equality, step by step.

Posted by Anti-discrimination Bagpack at Tuesday, May 26, 2020