One sunny day our lovely volunteer Carmen had an interesting talk with the President of the Lesbian Gay Bisexual and Transgender Association in Plovdiv that turned up into the interview. This is the story from the person who will never give up to fight for their rights and it has to be heard.

Ivelina's laugh is strong, brave and sincere, like her. She is the President of the Lesbian Gay Bisexual and Transgender Association in Plovdiv, the activity to which she dedicates hours and hours of her time. She thinks the less people understand the reality, the more you have to talk about it. During our meeting, just by listening to her, I realized how easy it can be to reach people when you really believe in something and gain attention to it with a sense of humor and naturalness. This interview has been done in Spanish, as Ivelina has been living in Cataluña for five years. Hope I will not loose readers in translation.

Carmen: How did you start working with the association? 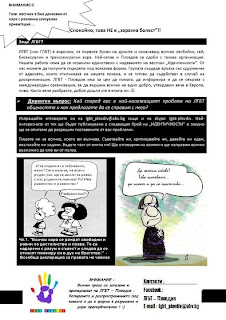 Ivelina: Our association is the most active in Bulgaria. We have been working for two years but officially we have registered only last month. Until this moment we couldn’t ask for grants, nor financial support, nothing... We started working on the 1st of March of 2011, during la Martenitsa of Bulgaria when we have the custom to make two traditional dolls, one is a boy called Pizho and one is a girl called Penda. The tradition says you have to carry this dolls with you till you see a stork, a sign that spring has arrived. So, for our first action, we decided to make and carry two girls and two boys dolls. The same day we started with the publication of a newspaper called Identities. We translated it into Spanish and English. The printing of the newspaper was paid with our money, and at that moment we couldn't afford to keep working on it so we were able to publish only 10 numbers of it.

C: Have you done or are you doing any online anti-discrimination actions?

I: Yes, we are already carrying out an online campaign against hate speech towards LGBT community, immigrants, Roma community... We are fighting against all kinds of online discrimination. Until now, we managed to close three fascist web pages (with the support of bggaylife.com), more than 2.000 videos and lots of articles. Actually, one of our main tasks is to explain the journalists which words and expressions should be used to refer LGBT community. I am sending them screen shots with all suggested changes underlined. It's a matter of five minutes to change it, but very often they don't pay us any attention. They can act like this because they are in Bulgaria. If they were in another country, with this attitude, they wouldn't even have their newspaper nor their web pages... We think words are so important because you can confuse public opinion with them. For example, if you use homosexualism instead of homosexuality, you are implicitly saying homosexuality is a disease, because the suffix ism is usually connected with illness (paludism, astigmatism...). The expressions used to refer to homosexuality and heterosexuality should be equal.

C: How do you consider LGBT situation in Bulgaria compared to other European countries?

I: In Bulgaria there is a lot of discrimination. There is a Commission Against Discrimination but they just act if there is a complaint filed by an individual or an organization representing the allegedly discriminated group. Furthermore, fines are ridiculous. There have been many trials against people who discriminate, even against famous people (because here in Bulgaria everyone says whatever they want) and the fines have been equivalent to what they spend in one night partying. In most of the cases the fine is about 200 BGN, and this is an amount these people can easily afford.

C: You, as an association, have you reported any other actions? 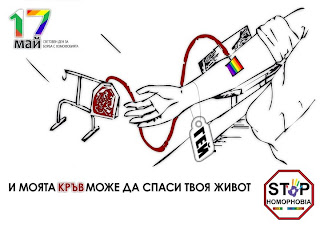 I: We reported the National Blood Transfusion Centre, because they were using some leaflets in which it was said homosexuals cannot donate blood. Finally, the case was closed because the judge said these leaflets were made before the law came into force, and we couldn't prove the date. This kind of measures are stupid. First of all because they can’t prove whether someone is gay or not, and second because they are contributing to the stigmatization of a group. Imagine the people who are in the waiting room reading these brochures, for sure they will think, if they can't donate blood it's because there is something wrong with them. They should be sick...

C: What about the Gay Film Festival that is held this week? Are you organizing it? 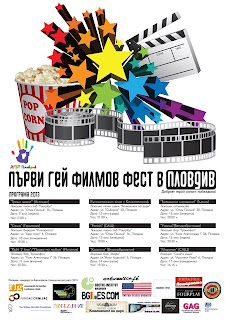 I: Yes, the 8th of June the First Festival of Gay Cinema started: short films, feature films, documentary films... We were threatened from the first day of festival. We informed the police but they didn't come to protect us. On Friday night one group of ten neonazis or whatever they were, came into the bar and asked me: “Is it here the faggot movie?, and I replied: “Here is Gay Film Festival, yes, and the sessions are open to everybody”. They took a seat and I presented the movie: “Thank you for being here, I 'm so glad to see that interest is growing”(laughs). I went out immediately to call the police, and when I went back to the bar these guys were shouting, insulting the rest of the people. And that night I was organizing everything alone! A mortal fear! At the end, they broke the projector and left. The police arrived 20 minutes later. Next night, finally, we were protected by the police.

C: And what did the Council say? Did they support you?

I: Well, the Council has a lot of pressure with the nomination of Plovdiv as European Capital of Culture in 2019, and we said this Festival will support Plovdiv candidacy. Here, in Plovdiv, there are two mayor football clubs, and the supporters of one of them, when they knew we were supporting the candidacy, took back his support claiming: “If being European Capital of Europe means being a gay capital we don't want it anymore. If this is the price we have to pay, no thank you”. The Mayor said he couldn't support a movement that separates citizens. In the Council they also told us: “Luckily you have this abbreviation, LGBT, because listening all these words together...”.

C: What does Plovdiv LGBT community think about your association and this kind of social and political activism?

I: LGBT community in Plovdiv is afraid...Many of them have other priorities, do not care so much about activism. Some of them just want to go to another country to have family and children because they know that here it is impossible to do it. Many people have told me I am crazy, that I cannot change anything. I always reply: “If you don't try, certainly not”.

C: And university community? Have they supported the festival? Have they gone to the projections?

I: LGBT it's a taboo topic everywhere. For instance, some time ago we had a lecture about safe sex, and I started to talk about safe sex between women. The teacher stopped me: “This is so specific”, she said. But what if between the students there is a lesbian girl? It is just information, and information should be accessible for everybody. We should try to finish with taboo topics. Even in Plovdiv Red Cross there is a lack of information about this issue! When I told them, they just said they were not giving this information because they don't know how will people react. I was really surprised. There are a lot of stereotypes about us. One of my teachers asked me very amazed: “Are you lesbian? It doesn't show! And I replied, “yes, your heterosexuality doesn't show neither!”.

C: What moves you to keep on fighting for your rights, working so hard? What do you think, feel, want?

I: I don't have the support of my family and this moves me to keep fighting. The other day, after being attacked by this guys, we started the film session with an Amnesty International video which says: “World can change but it will not do it alone“. We are the persons who should and have to change it. As you say in Spain: “We already have the no, lets go for the yes”. I don't want to run away to Spain, I want to live here and enjoy all my rights because I am a person, as all others. Some Bulgarian people say they don't know any homosexual person and this is because we feel afraid of being ourselves. If we want to finish with discrimination we have to do it. The question is who is going to be the first. All persons are equal, doesn't matter who they love.