Between December and May 2013, more than one million people from all over the world had the same thought: coming to Bulgaria on holidays. Most of them were Balkan neighbors, coming from Greece, Macedonia, Rumania and Turkey, but in the statistics you can find cameras and passports from the five continents. Regarding their motivations, some of them came to Bulgaria looking for the wild nature of the country, historical places -Thracian, Roman or Ottoman ruins scattered throughout the territory-, cheap party and beers, winter sports... and among them and others, there were those who came to Bulgaria looking for all these things combined with Gay facilities. As it has been reported by one of the most important national newspapers 24 CHASA “Bulgaria has become a hit for gay tourism”. Specialized gay tours and agencies are emerging, offering one product which entails not only the most common cultural, historical or sportive attractions, but also the possibility of getting involved in the Bulgarian gay environment. From bars to hotels, restaurants, spas, saunas, information about groups and associations, sex shops, lists of websites of LGBT organizations... Gay Holidays in Bulgaria is one of these new companies. Recently established, its intentions are to “uncover the hidden beauty of our country in front of gay tourists (…) proving that Bulgaria is where anyone can have their perfect holiday, regardless of race, age or sexual orientation”. Talking about this topic and some others Lea, 27 years old, tourist in Sofia and volunteer at the LGBT Association Dundalk Outcomers, in Ireland. She considers Bulgaria as a really interesting destination for gay tourism, although she declares not having found any kind of gays facilities during her trip. When I ask her if she sees herself as a LGBT activist she replies she is just learning and looking for answers. This is part of the conversation we had during a Training Course in Plovdiv. 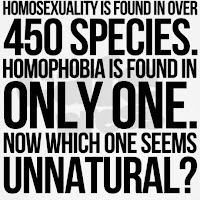 Lea: I didn't become gay, I was born gay. It is something you feel inside, you enjoy more girls' company than boys' one. The first time I heard the word “gay” I was a child and it was used as an insult. Some boys were pointing at other boy, laughing at him and repeating: "You are gay, you are gay". I was in college when I realized I am gay. I was studying bookbinding, my profession, and during one of the sessions we discussed the topic: “Being different”. Our teacher asked us to choose between being deaf, blind, handicapped or gay. Imagine. I chose being gay, just to see what happened. He explained us what it might feel like being different in this ways. That day I understood how difficult it will be for me. Being gay is a continuous fight. First, you have to fight with yourself and then with the society.

C: How long have you been working with Dundalk Outcomers association and which activities are you carrying out? 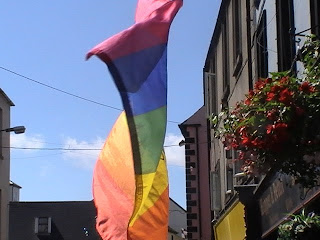 L: I have been a volunteer for this association for three years, helping them to organize different events related to LBGT community. The main goal of Dundalk Outcomers is to provide support and empower the Lesbian, Gay and Bisexual Community. We provide personal support, information on physical, mental and sexual health, and we have the "National LGBT Helpline". A line where everybody can call and express their feelings and situation. We are receiving a lot of calls from young people on a daily basis. All of them scared, with a lot of doubts, asking us if we think he/she is gay, and in that case, what can they do. We usually recommend them to visit us and have a talk. Our “Gaydar”, that’s how our sixth sense is called (gay + radar = Gaydar), always help us recognize if the person is gay or not. That is why for me is so funny when I hear a straight boy, after being in a gay club, telling how everybody was looking at him and trying to flirt with him. I'm always wondering: “Don't you realize that your version is completely wrong? They are looking at you like this, because they know you are straight (not being gay), and some of them are surprised to see you in a gay bar“.
C: How do you feel, and how are you experiencing LGBT community situation in Bulgaria?
L: I spent the whole Sunday in Sofia. I couldn't find a gay bar, the less so LGBT flag. It was difficult. I asked some people in the street but nobody knew where these bars are. The only chance how to find these bars was, to have the exact address. I was also really surprised when I arrived there and there wasn't any gay flag on the door, nor a little one that could tell me: “Yes you are right, you are here”. I can understand that Bulgarian LBGT community can be scared to show up in public, but the fight for rights must start somewhere. Also, I would like to highlight the economic repercussion of this lack of information and gay flags. Can you imagine how many tourists come to Sofia every year looking for gay facilities? It seems like these bars don't want to earn more money. Sofia is really a beautiful city. It’s also cheap here for people from Ireland, France, England, Germany, etc. A lot of LGBT tourists are coming to Bulgaria to enjoy their holidays and it can be very disappointing if you can't find any gay bar. That's why I really recommend to all these bars to put a gay flag on their doors. Even small ones, or just a sign: "Gay friendly". Rainbow flags please!
C: How was the feedback you received from the people you asked where these bars were?
L: I was walking around Sofia with my backpack wrapped into my gay flag. I 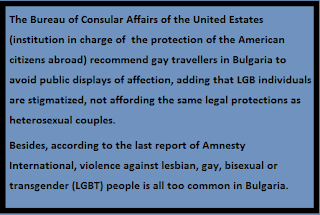 wanted to see how people react, if they would recognize the flag, if they would tell me something... There was not any bad reaction, I just got the attention. I also think that some people couldn't recognize the gay flag. Afterwards, some people from this Training Course told me that I was lucky, because somebody could recognise the gay flag and insult me. Apparently, it usually happens here, in Bulgaria.


C: Why do you think some people don't like LGBT community?
L: Firstly, I think it’s a matter of education. In general, the first time you hear the word “gay” it’s used as an insult, not as a word for person who likes the same sex. Your family tells you that gay people are sick. Every time I talk to someone about this, especially guys, they say: “Oh my god, I can't imagine being with a boy”, and I always reply that is not about YOU, is not about YOUR feelings, is about people who can imagine it, and of course, like it. Why people tend to personalize?
C: In your opinion, does discrimination exist in between LGBT community? 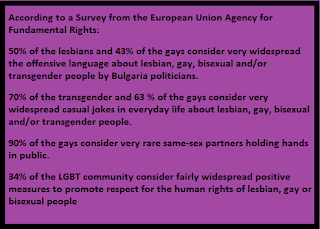 L: You will not believe, but yes, it exists. Some of the gay clubs don’t allow you to walk in because you are lesbian/woman. Also, most of the magazines are for gay guys. The hierarchy in our gay world would be: first gay guys, then lesbians, and in the last place transgender and transsexuals.
C: Do you consider yourself as a LGBT activist?
L: Not really Carmen...I am still learning and looking for answers.
LINKS:
http://www.outcomers.org/
http://www.amnesty.org/en/library/info/EUR15/001/2012
http://www.gayholidaysinbulgaria.com/about-us
http://www.local-life.com/sofia/articles/gay-sofia
http://www.gejszatravel.pl/zdjecia/travel%20teczowo/guides/sofia_guide01.pdf
http://travel.state.gov/travel/cis_pa_tw/cis/cis_1074.html#safety
http://bulgariatravel.org/en/dynamic_page/111/business
http://www.nsi.bg/otrasalen.php?otr=57
http://www.24chasa.bg/Article.asp?ArticleId=1738742
http://news.ibox.bg/news/id_40814132
http://fra.europa.eu/en/theme/lgbt