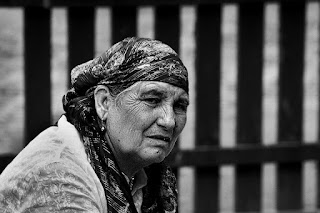 “Europe has a shameful history of discrimination and severe repression of the Roma. There are still widespread prejudices against them in country after country on our continent”

Roma people in the European Union:

But why do we accept discrimination and exclusion of people based on a specific feature – in this case: being Roma?

What is their history and what problems had they to face in the past and what is the situation now? Which role is education playing and what could be done to tackle the ongoing discrimination, exclusion and the human right violations?

According to historians, Roma ancestors from northern India first reached Europe from the 9th century onwards. Their traditional way of living was to travel from place to place and to work as artisans with wood, copper etc., as musicians, entertainers, fortune-tellers and farm workers. At the beginning they were welcomed for their skills, then the church and government started to see them as suspicious outsiders and Roma were forced into slavery in many regions, even in the 19th century. Besides this, in the 1490s laws to ban Roma people were adopted by the Roman Empire and in central and western Europe. The Ottoman Empire in southeastern Europe was more tolerant but passed laws which forced Roma people to settle and in many other countries assimilation policies were adopted, which didn’t allow Roma to wear their typical clothing, to speak their language etc. In countries like Wallachia (which is now Romania) and Moldavia they were enslaved. In the medieval era Roma were sentenced to death in Denmark, Switzerland and England, which later on lead to organized persecution and many countries (Germany, Poland etc.) expelled the Roma people (Amnesty International 2015). After that, in the World War II, many Roma people were deported to forced labor camps, used for medical experiments or forced to sterilization and between to 200.000 and 500.000 Roma and Sinti were killed by the Nazis (Amnesty International 2015; Holocaust Memorial Day Trust 2022). If that weren’t enough, discrimination and oppression of Romas continued in the Soviet Union plus in Slovakia and the Czech Republic around 90 000 Romani were forced to sterilization in the period of 1970 and 2000 (Amnesty International 2015).

And in the 21st century stigmatization, prejudgement, discrimination and exclusion of Roma people is still ongoing and affect the life of Roma people like their dwelling, their property, their education (European Commission 2020 according to Strauß 2021) and their whole living conditions.

But why do a lot of people in the society (including the government) see Roma people as different, inferior, less valuable or whatever? By the way, Elvis Presley, Charlie Chaplin and Pablo Picasso are also Roma.

Don’t we have more stuff in common than in difference? Why do we not allow each other to live in peace, dignity and safety? Sure the history and the society is shaping ourselves, but why shouldn’t we use the history to learn from it, to reflect and to change something?

Taking into account the situation of Roma people in the past and the facts about discrimination, it is obvious that “the situation is not the inevitable result of poverty. It is because of centuries of prejudice and discrimination from governments, institutions and individuals. Together, they have pushed the great majority of Roma to the margins of society – and kept them there”

If you think about what problems a lot of Roma people have to face in your country, it is clear that discrimination is still a huge ongoing problem, which results in poor living conditions for them. They have far less opportunities in education and in participation and therefore it is hardly possible to break the vicious cycle of having a poor socio-economic status.

Especially if you consider the segregation, which “doesn’t only vilify children and offer a lower quality of education, but it destroys the human relationships in these regions for a long time” (Vlado Rafael, director of EduRoma, cited by Sirotnikova 2019), it’s obviously that prejudgement, discrimination and exclusion continue. Therefore it’s important to use schools as “a place where these relationships are cultivated” (ibid.) and where cultural bias could be overcome and besides to ensure quality of education – for all people no matter which nationality, religion, culture etc.

Besides, which role do politics and media play?

What could each of us do?

A campaign like “Dosta! Go beyond prejudice, meet Roma and Travellers!” is one example!

Amnesty International (2015): The Roma in Europe: 11 things you always wanted to know but were afraid to ask. URL: https://www.amnesty.org/en/latest/campaigns/2015/04/roma-in-europe-11-things-you-always-wanted-to-know-but-were-afraid-to-ask/roma_in_europe_briefing.pdf (amnesty.org.uk). Last viewed on the 4th of August 2022.

Amnesty International: Briefing. Human rights on the margins. Roma in Europe. URL: https://www.amnesty.org.uk/files/roma_in_europe_briefing.pdf. Last viewed on the 3th of August 2022.