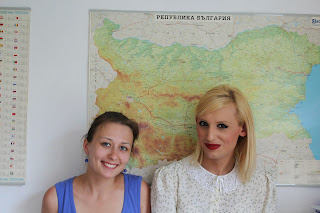 When two months ago an Italian volunteer came to our office, I was a little bit shocked and confused, to say the least. Shocked, because before seeing the person, I saw really fancy high-heels (that would be a perfect pair for a night club, rather than the office). Confused, because it was a… guy who was wearing them.
Yes, I was amazed and curious. And I am fine to share this now because I have never seen such a person before - one with a masculine physical body but deep inside feeling he is a woman. Plus he was making efforts to be like a real woman.

Alexis is very charming and attractive. I remember myself staring at him the same day in a meeting we had and thinking: am I going crazy? Could that person be a woman? Tall, slim, big tender eyes, blond hair… The only evidence of his masculinity was his Adam’s apple bulging out on his throat.

I must say that it took me more than a month to ask about her things which I was very curious to reveal. All that time she was showing herself like a really unique, friendly and gifted person, plus a real polyglot. Being crazy about Bulgarian music, she started translating lyrics of songs and study Bulgarian language. Speaking Russian was just fun for her. She can also count till 10 in Chinese without any problems while showing the respective symbols with hands. She understands Spanish. She speaks some French. She is fluent in English, needless to say. And she has two mother tongues - Italian and Sardinian. I reckon I can even teach her Lithuanian!

I have always asked myself about the relation between human beings and their bodies. Then I met her and was ready to ask how it happens that at certain point people realize they are something else from what is expected from them. I must admit I have never had bigger dilemmas about my own body or sexual orientation. Yes, I can’t stand my aching spine and big tummy. A lot of people in my life have asked me if I was pregnant. No, I was not. And I am not. I normally look a little bit pregnant, you know. However, even this is not a reason not to love my body and be happy I have exactly this temporary vessel for my soul.

But there are indeed people who are unhappy. They destroy themselves with strict diets. They change themselves with some surgeries or hide out under tones of make-up. And there are people which do not accept their bodies at all and they want to change absolutely everything in themselves.

I think it is horrible to wake up every morning and disguise yourself, not accepting your nature.

According to Alexis, she feels a woman ever since she remembers herself. She took a final decision to be who she wanted to be quite young, when she was only 14. Her family and closest people’s reactions were negative. Alexis had to change her school and living place. She experienced a lot of different and tough things. This young woman doesn’t want to go back to Italy. Her short-term EVS project is almost over and she is determined to find a job here, in Bulgaria. Because here she feels safer and accepted in a very positive way.

Alexis used to work in a menthal diseases hospital in Italy. I remember one of her thoughts then she was sharing her experience about this job. "Yes, the pacients in these hospitals are weird and they can be even dangerous but the best thing about them is they never judge.“

I smile each time I remember my first reaction to meeting Alexis. People are different. Their differences are not the reason to hate them or - even worse - hurt them. Maybe it is quite understandable to be a bit confused when you are close to something unfamiliar. But that is the point of having a tongue - we can always use it and ask and eventually get some information. Ignorance causes stereotypes, stereotypes cause discrimination and finally discrimination turns into hate. I don’t know about you but my life is much brighter without all this negative stuff.

I think this post might be a decent greeting for the passed International day against homophobia (May 17th).

Alexis, thank you for the inspiration and one of the best lessons in my life.
Virginija