Bride Kidnapping is the term given to marriage that results from kidnapping women. This is a practice in which a man abducts the woman he wishes to marry, so the woman is enslaved by her abductor, raped and taken as his wife. Bride kidnapping has been practiced around the world and throughout prehistory and history, and it continues to occur in countries in Central Asia, Kyrgyzstan, Kazahstan, Uzbekistan, India, Pakistan, Ethiopia and other parts of Africa, among people as diverse as the Hmong in Southest Asia, the Tzeltal in Mexico, the Romani in Europe, and the tribes in amazon jungle in South America.
In most nations, bride kidnapping is considered a sex crime rather than a valid form of marriage.

How does it happen?
The following examples and statistics are mostly about rural Kyrgyzstan, where the practice is more frequent and where half of the Kyrgyz ethnic women are married after being kidnapped and raped by the men who becomes their husband, even though this practice is illegal since 1994. 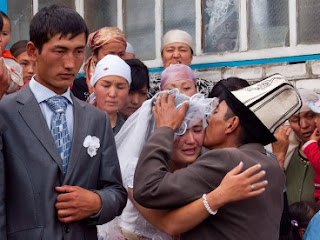 Although Kyrgyzstan banned kidnapping of brides in 2013 and child marriage in 2016, about 12,000 women and girls are kidnapped for marriage each year, according to the Kyrgyzstan Women's Support Center. In the first half of 2019 alone, Kyrgyzstan had 118 cases of bride abduction. There are 94 cases of kidnapping of girls with the aim of marrying, 12 for coercion into marriage. Most of these kidnappings ended up in court.

Burulai Turdaaly Kyzy, a Kyrgyzstan woman, was brutally stabbed to death by a man who had abducted her hours earlier. The man, Mars Bodoshev, was convicted of the kidnapping of the bride and sentenced to 20 years in a high security penal colony with confiscation of property for murder and kidnapping in order to force her to marry. In late 2018, a mural portrait of Burulai appeared in Bishkek, the city where she was abducted, at the medical university where she was studying.