The main purpose of cinema itself is to make us emotionally excited. We want to be provoked, to be touched or even shaken after a movie. I was so shaken during „The Tribe“ (2014, director M. Slaboshpitsky) that I even lost my consciousness.


I was invited to see this movie by my colleague Alexander. This young man is a talented designer. But the communication between us was a little bit complicated and specific from the very beginning. This is because Sasho is deaf. I must tell you that it took me some time to find a way to communicate with him as I don‘t know sign language. But believe me – Skype, FB and a simple sheet of paper can help overcoming all communication barriers. 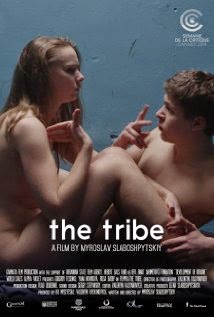 I already made an unique experience at the Sofia Cinema Festival (me and my friend Milen bought the tickets to Turkish movie with Bulgarian subtitles; I survived one hour and a half from three hours). So this time I was really suspicious after Sasho told me that this movie is in sign language without any subtitles. I was afraid that I would not be able to understand anything. Luckily, I was totally wrong.
All the actors of the movie are young nonprofessionals. All of them are deaf and communicate only in sign language. Not even a single word is said. There is no soundtrack. But exactly this gives us a big spectrum of choices for free and independent interpretation. Since the actions themselves are concrete and visible, you get the message and it is impossible not to understand anything.

This film is a story about a teenager who is pushed to become a member of an already formed and strictly hierarchic „tribe“. The situation is quite stereotypical because at first he is being inspected by the leaders of the group, after that he needs to fight and prove his worth. After the inclusion he breaks all the possible unwritten rules of the tribe and therefore is ignored, isolated, discriminated against by everybody. Finally he destroys the old tribe by killing the leaders of it one after another.

All this happens in a regular deaf people boarding school in Ukraine. Children and teenagers study and live together there without any control by teachers. Nobody cares about them, so they rob, steal and organize prostitution. In this criminogenical case sign language looks like a secret, encoded way to transmit information.
The impression of this film is almost unbearably realistic. The camera fulfills its main function: it just stands unmovable in the centre of the action and records everything. The audience has no choice, they can only merge with the camera and observe the action. The regular spoiled viewer which is used to see everything from all possible perspectives can really be driven mad, especially during the very open and brutal sex scenes.

The consequences of this brutal sex are very sad and sorrowful. Only after the deaf girl has pushed a ring bell on a very suspicious door and an even more suspicious woman has opened it, we realize why the hell this girl has had a very emotional conversation with her best friend before going there. I lost my consciousness exactly during this illegal abortion scene...
No, there is no blood, tears or hysteria in this scene. The camera is on and records the crime in the same stable and cold way. The woman sterilizes all the medical instruments on the regular cooker in the regular kitchen. She washes her hands without any soap and dries them with a dirty towel.

The whole scene is completely silent. We can hear only a horrible sound of metal instruments being taken and put back after use. Our girl, the patient does not even hear this. She only yelps and dares to moan loudly only in the end, suffering from unbearable pain. We only can guess how she feels and what she thinks after all in that awful bathroom...
There was a short discussion after this movie with the audience. Almost all of them shared the opinion that this movie is shocking, horrible and amazing at the same time. This movie is a master piece – the cinema language does not need any spoken language because its visuals are universal. This type of language does not need any subtitles. I think „The Tribe“ should be the first one to check off your movie wishlist.