On May 29, the International Day of United Nations Peacekeepers is celebrated.
Usually known as "Blue Berets" or "Blue Helmets", Peacekeepers are civilian, police and military men and women who come from different backgrounds and cultures, but work together in order to protect the ones who are exposed to any kind of threats and provide support to countries in transition from conflict to peace. They can supervise cease-fires to protect civilians and monitor peace processes in post-conflict areas, protect human rights, support free and fair elections, disarm ex-combatants, promote the rule of law, economic and social development, minimize the risk of land-mines, and more.

United Nations peacekeeping was initially developed during the Cold War in 1948, starting with United Nations Truce Supervision Organization (UNTSO) and United Nations Military Observer Group in India and Pakistan (UNMOGIP) operations, with the intent of resolving conflicts between states by deploying unarmed or lightly armed military personnel from some countries to areas where warring parties were in need of a neutral party to observe the peace process. The peacekeeping operations were held by the United Nations Office of Special Political Affairs until the late 1980s, and in 1992 the official Department of Peace Operations was created, which is the department that now coordinates the peacekeeping missions. These kinds of operations are authorized by the Security Council, once the United Nations Charter give them the power and responsibility to take action to maintain international peace and security. The operations are settled and fulfilled by the UN itself, with troops serving under its control. In these cases, peacekeepers remains members of their armed forces, not constituting an independent "United Nations army", because it doesn't have such a force. In cases where direct UN involvement is not considered fitting or beneficial, the Council authorizes regional organizations such as the North Atlantic Treaty Organization (NATO), the Economic Community of West African States, or alliances of willing countries to guarantee peacekeeping or peace-enforcement tasks.

Peacekeeping has proven to be one of the most effective tools available to the UN to assist countries torn by conflict to achieve a peaceful environment. Peacekeepers provide security and political and peacebuilding support in order to make the transition from conflict to peace way easier, by using strenghts as legitimacy and the ability to deploy and sustain troops and police from around the globe, for example, integrating them with civilian peacekeepers, but success is never guaranteed, because UN Peacekeeping almost by definition goes to the most physically and politically difficult environments. UN Peacekeeping is guided by three basic principles:

What kind of Blue Helmets are needed?

The most common sort of UN peacekeeper is the infantry soldier, however, UN needs specialized personnel who are called as "enablers" - they are skilled soldiers, including engineers, who for example were able to help with the post-earthquake reconstruction in Haiti or the building of new roads in South Sudan. It is also needed helicopters and their crews, as they enable United Nations to extend their area of influence and be much more visible. Other specialist enablers include transport companies, communicators and medical personnel.

Women and their role in peacekeeping operations 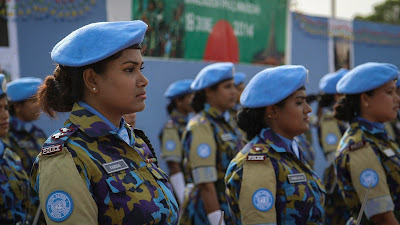 Security Council Resolution 1325 urges equal participation of women at all sectors of peacekeeping operations, including the military. This is also reinforced in the policy on gender equality by the Departments of Peace Operations and Operational Support and the guidelines for integrating gender perspective into the works of the UN Military (2010). Women peacekeepers have proven that they can perform the same roles as men, from command to frontline roles, while bringing an added value to military operations. Female soldiers provide an invaluable perspective in planning operations and in making key decisions, especially those affecting civilians, particularly women and girls.

The deployment of female peacekeepers to peace operations contributes to achieving sustainable peace and the improved wellbeing of women and girls in conflict-affected regions. A female soldiers' visibility can empower women and girls and increase women's participation in the security sector. Some unique tactical skills female military personnel bring to this field include screening of female civilians and conducting of house searches in areas where it is not culturally appropriate for men to ender private space. Local populations in host countries often feel more comfortable liaising and sharing information with military troops that include women alongside men. By obtaining better information, they can better protect these communities.

In 1993, women made up 1% of deployed uniformed personnel. In 2019, out of approximately 95,000 peacekeepers, women constitute 4.7% of military contingents and 10.8% of formed police units in UN Peacekeeping missions. While the UN encourages and advocates for the deployment of women to uniformed functions, the responsibility for deployment of women in the police and military lies with Member States. UN Police Division launched "the Global Effort" to recruit more female police officers into national police services into UN police operations around the world. The 2028 target for women serving in military contingents is 15% and 25% for military observers and staff officers. The 2028 target for women serving in formed police units is 20% and 30% for individual police officers.

Why is it important to have women peacekeepers?

More women in peacekeeping means more effective peacekeeping. Women peacekeepers improve overall peacekeeping performance, have greater access to communities, help in promoting human rights and the protection of civilians, and encourage women to become a meaningful part of peace and political processes.
●Improved operations and performance: Greater diversity and a broadened skillset means improved decision‐making, planning and results, leading to greater operational effectiveness and performance.
●Better access: Women peacekeepers can better access the population, including women and children - for example, by interviewing and supporting survivors of gender-based violence and violence against children - thereby generating critical information that would otherwise be difficult to reach.
●Reflecting the communities we serve: Diversity in United Nations peacekeepers allows engagement with all members of the communities we are there to protect.
● Building trust and confidence: Women peacekeepers are essential enablers to build trust and confidence with local communities and help improving access and support for local women, for example, by interacting with women in societies where women are prohibited from speaking to men.
●  Help prevent and reduce conflict and confrontation: Diversity in peacekeeping helps to address the disproportionately negative effect that conflict has on the livelihood of women and bring new perspectives and solutions to the table by effectively addressing the needs of women in conflict and post-conflict settings, including those of women ex-combatants and child soldiers during the process of demobilizing and reintegration into civilian life.
●Inspiring and creating role models: Women peacekeepers serve as powerful mentors and role models for women and girls in post-conflict settings in the host community, setting examples for them to advocate for their own rights and pursue non‐traditional careers.

There have been several reports during UN peacekeeping missions of human rights abuse by UN soldiers, notably in Central African Republic in 2015. Also, reporters witnessed a rapid increase in prostitution in Cambodia and Mozambique after UN peacekeeping forces moved in. In the 1996 UN stude "The Impact of Armed Conflict on Children", former first lady of Mozambique Graça Machel documented: "In 6 out of 12 country studies on sexual exploitation of children in situations of armed conflict prepared for the present report, the arrival of peacekeeping troops has been associated with a rapid rise in child prostitution".
Gita Sahgal spoke out in 2004 with regard to the fact that prostitution and sex abuse crops up wherever humanitarian intervention efforts are set up. She observed: "The issue with the UN is that peacekeeping operations unfortunately seem to be doing the same thing that other militaries do. Even the guardians have to be guarded."

However, there is strong evidence that the presence of peacekeepers significantly reduces the risk of renewed warfare, because the more peacekeepers, the fewer battlefield and civilian deaths. Also, the promise to deploy peacekeeping troops can help international organizations in bringing combatants to the negotiation table and increase the likelihood that they will agree to a cease-fire and, perhaps, that will help to achieve peace. But it's believed that this positive effect is a "short-term success", as it's observed that is lessened over time, so, the longer the peacekeepers remain in a country, the greater the likelihood that peace will maintain.

Click on the link below if you want to see how peacekeepers work:
https://www.youtube.com/watch?v=DgITogWbBdI