Lyubimets and Butmansti. In Bulgaria most of the “Syria free” refugee voices are spending their first month behind the bars of these two migrant detention centers. Despite its poor living conditions, these two institutions keep being a common starting point in the Refugee Status Determination Procedure. In Butmansti, the slow processing of asylum applications, the lack of freedom and the overcrowded spaces have triggered the last hunger strike few days ago. The situation is further aggravated by the absence of regulation regarding the limit of time refugees can be under detention in these centers, and by the fact that, according to the last declaration of the Interior Minister, more than 10 000 Syrian refugees are expected to be here by the end of the year. Bulgaria is living a refugee crisis. The country is facing a lack of resources that not only affects these pseudo-prisons, but also the Registration and Reception Centers of Banya and Sofía (RRC) -two camps where some of the asylum seekers are sent once they have asked for protection-. In a nation where the refugees have never been a priority for the government, and where the number of people seeking for asylum is increasing twice or even three times a day as a result of the Syrian war, the asylum right is in serious danger.

This interview shows the daily life of the refugees and asylum seekers in Sofia RRC from the point of view of an EVS Italian volunteer. Her name is Giorgia and she came to Bulgaria after being working for the United Nations Agency for Refugees in New York. The project she is participating in is called “A warm welcome”, and is implemented in the Integration Center of Sofia RRC by Cooperation for Voluntary Service (CVS) and Caritas. Georgia is a foreigner between foreigners willing to be an active part in the improvement of the refugees´ situation in Bulgaria.
How many RRC do exist in Bulgaria and who is leaving there?

In the RRC are living asylum seekers – all the people who have applied for the refugee status-. There are two different RRC in Bulgaria, one in Sofia and another one in Banya. The differences between both are huge. In Banya they don't have any association working with them, nor Integration Centre. It means, for instance, that if you are in Sofia you will receive English and Bulgarian language classes and therefore, if you get the refugee status you will have more opportunities to be integrated in the labor market than asylum seekers from Banya. Regarding the children, you can also see the difference between both. Sofia's RRC children have art classes, languages classes, we were playing a movie in the centre once a week during one month... Banya children don't have access to any of these activities. That's why I decided to organize ten days workshop for children in Banya next week, in order to make them participate in different workshops and games.

How long can asylum seekers wait to get the status in these RRC? 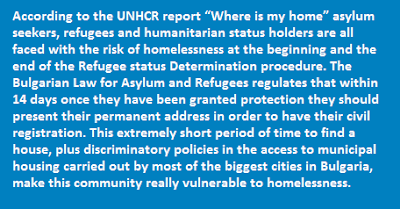 It depends on the case. For example, yesterday I met in RRC Sofia a family from Afghanistan who have been waiting for the status for one year. There is no limit of time, there are families that get the status in two, three months, other families in eight months and others in one year...But what is sure is that when they get the status they have only fifteen days to leave the centre and find a house...And this time is not enough. From my point of view it's completely necessary to reinforce the housing and employment support which refugees receive after getting the status.

Can they work during this time?

Asylum seekers have the right to work if for reasons beyond their control the procedure is not finished within one year of applying for the refugee status. This is according to the law, but actually they are working during the application procedure. I also think they don't know the law, the conditions. They don't even know the difference between asylum seekers and refugees. In most of the cases I have to explain them.

How are the living conditions in RRC?

They are living in four or six beds' room. The families always are staying together. They have a cooker, a bathroom, a wardrobe and that's all. They can go out of the centre freely but they should come back before ten o clock, and they receive 65 levas per person per month. Even though the accommodation is paid, this amount of money is not enough taking into account they have to buy food, pay for transportation...Some NGO'S are given them some food once a week, but anyways, is still not enough.

Do they receive any education in order to facilitate their future job integration?

The Integration Centre is in charge of it, and CVS and Caritas are supporting them. Since my point of view, the CVS project I am participating in is great. It's carried out by local volunteers who go to the Integration centre twice a week to teach refugees Bulgarian and English, apart from organizing other different workshops. I think our work it's really important because gaining a good command in Bulgarian and in English is something essential for the integration of the refugees in the Bulgarian society. Apart from this, the Integration Centre offers some other courses in hairdressing, cosmetics and tailoring, but they are just available for refugees, not for asylum seekers because there are not enough places for all of them.

Refugees and asylum seekers' travel stories. How is their entrance in Bulgaria?

They are usually caught in the border and they are sent either to Lyubimets or Butmansti migrant detention centre or to the jail if they don't have documents. Later on, they are sent to Sofia or Banya RRC.

How do they come in general? Are the victims of human smuggling, are they coming with false documents...?

Both. I can tell you some stories about it. For example, in Sofia Integration Centre there is a family from Syria. They came to Bulgaria running away from the war with the final purpose of reaching Germany. By selling all their family jewellery, they got the money to pay for false documents in which it was written they were from Germany. They travelled to Sofia by bus and they were caught by the Bulgarian police border. Firstly they were sent to Lyubimets, where they spent 4 months, secondly to Sofia RRC and now, finally, they have the status. The case of this family is really common. Bulgaria is not the final desired destination for most of the refugees, however, they are applying for asylum here because according to Dublin Regulation there is a must to apply for asylum in the first country you reach.

Not accompanied minors. How is the reality of them? Are they going to the school? 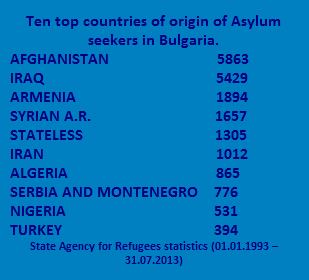 This is the target group of my project so I know some of them and I just can say that they are great! The majority of them I know, are from Afghanistan. They came by bus here to find a job in order to send money to their families. It's mandatory for them to have a tutor, who is organizing his money. At the beginning I couldn't say they were unaccompanied minors because they are living like the others, the same way. And about their education, they are going to the school when they have the status.

Which future do you see for refugees in Bulgaria?

As I told you, several of them don't want to stay in Bulgaria so they don't want a future here. They want to go to Northern, Western Europe, because most of them have relatives in these countries. I think they don't want to stay in Bulgaria because they have a lot of difficulties to find a job, and if they find it, it uses to be in not qualified positions, like in call centres etc. But in my opinion this low rate of employment among refugees is also connected with the economic crisis in which we are immersed.

And not with discrimination?

Of course with discrimination also. One of the reasons of why they don't like Bulgaria it's because they feel discriminated against. They are always telling me that one of biggest problem they find here is that people don't like them. It doesn't happen to everybody but I would say that this is a general feeling between this community.
Labels: asylum seekers Banya Bulgaria EVS volunteer refugees Registration and Reception Center Sofia