The Humanitarian Crisis in Yemen

July 31, 2020
Yemen is the biggest humanitarian crisis in the world with more than 24 million people, out of the 29.8 million total of population*, in need of humanitarian assistance, including more than 12 million children. This means that more than 80% of the population is affected, as a consequence of  the conflict that escalated in March 2015 that led the country into being severely devastated by a civil war.  According to the Yemen Data Project, more than 17.000 civilians were killed and injured since the begining of the conflict, and a quarter of all civilians killed in air raids were women and children. Furthermore, more than 10 million of people are at risk of famine and, because of this, in 2018 the United Nations declared it is "the worst humanitarian crisis in the last 100 years." 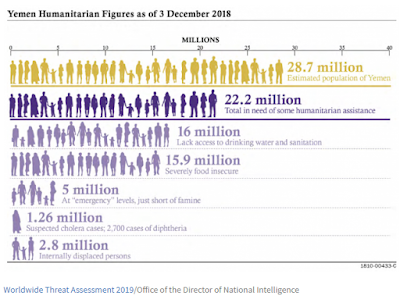 About 70% of the population lives with less than 1$ (dolar) a day, and many employees and pensioners have not received any salary since 2016. Given this and the fact that the economic status is not favorable, and the country itself is unable to produce its food, the price of these type of goods has increased exponentially, limiting the access to the population and, therefore, increasing famine.
Unfortunately, these millions of Yemeni civilians are affected not only by the instability and insecurity of the armed conflict, but also due to the hunger that is plaguing the country and the biggest cholera crisis in the recent years - the fact that there is a lot of difficulty in accessing water and that it is contaminated helps spreading different diseases. However, in 2020, there is yet another concern for this already devastated population: the pandemic caused by the COVID-19 virus.
The COVID-19 not only comes at a time when Yemen's health infrastructure is essentially non-existent after years of civil war, but also the virus has coincided with Yemen's rainy season, which brings the potential for cholera outbreaks - the 2019 cholera outbreak started during the rainy season and it was the second-worst outbreak in global history and it is still not officially under control. As this wasn't enough, Yemen has also been hit by once-in-a generation flooding that has affected more than 100,000 people, left thousands of people homeless and impacted camps for internally displaced people.
On February of 2020, a three-year blockade was broken and the first flight of critically-ill patients left Sana'a on the way to Jordan. Nonetheless, a few days later a Reuters report warned that aid to rebel-controlled areas may have to be reduced because humanitarian workers could no longer ensure they could reach those in need. As multiple attacks hit Yemen in the first few weeks of March, conflict was escalating again just as COVID-19 began its global spread. As the concern over the potential for COVID-19 to overwhelm Yemen's already massacred healthcare system grew, it was decided to implement a flight ban that included chartered medical evacuations of critically-ill patients. It also caused humanitarian agencies to only bring in staff who were absolutely essential, slowing the already slow support Yemen was getting. Implementing social distancing and isolation measures in temporary housing and camps for displaced people is still a challenge and only increased the already existing problems.
Lise Grande, the head of the UN's humanitarian program in Yemen, shared the following thoughts: "There are 41 major UN programs, and 31 of those programs will either be shut this month of April or reduced. We're talking food programs, health programs, water and sanitation programs, protection programs, shelter programs. So we have the crisis created by the war. We have the crisis created by COVID."
Although Yemeni people are facing quite some difficult challenges posed by the humanitarian, health and safety situation in the country, they are still coming together to support each other and beat the odds - for instance, women re-opened a sewing factory to make masks in response to the COVID1-19 pandemic.
As previously mentioned, more than 12 million Yemeni children are in need of humanitarian assistance and continue to be killed and wounded in the conflict, while the damage and closure of schools and hospitals has disrupted access to education and health services, leaving children even more vulnerable.
UNICEF's report shows that:
To be able have a humanitarian response in Yemen, UNICEF is appealing for US$461 million, with an additional US$53 million for its COVID-19 response alone. So far, the COVID appeal is only ten per cent funded and the humanitarian appeal is only 39 per cent funded. For example, the report highlights that crucial water and sanitation services for three million children and their communities will being to shut down from the end of July, unless US$45 million is secured. For this, UNICEF is working with the World Health Organization and the authorities across Yemen to get life-saving aid to children in desperate need.
Sara Beysolow Nyanti, UNICEF Representative to Yemen, declared: "We cannot overstate the scale of this emergency as children, in what is already the world's worst humanitarian crisis, battle for survival as COVID-19 takes hold. If we do not receive urgent funding, children will be pushed to the brink of starvation and many will die. The international community will be sending a message that the lives of children in a nation devastated by conflict, disease and economic collapse, simply do not matter."
To understand better this ongoing crisis, is necessary to understand the complex political, economical and humanitarian panorama of the country.
What originated this crisis?
The civil war that has been devastating the country, known as the Second Yemeni Civil War, is an ongoing conflict that began in 2015 between two factions: the Abdrabbuh Mansur Hadi-led Yemeni government and the Houthi armed movement, along with their supporters and allies - both sides claim to constitute the official government of Yemen. Nowadays, Houthi forces control the capital, Sana'a, allied with forces loyal to the former president Ali Abdullah Saleh, while the forces loyal to Hadi, who were previously based in Aden, have been driven out by the Southern Transitional Council. Also, Al-Qaeda in the Arabian Peninsula and the Islamic State of Iraq and the Levant have carried out attacks throughout the country, with Al-Qaeda in the Arabic Peninsula controlling some parts of the territory. Simultaneously, the Hadi government is in conflict with UAE forces as a result of UAE military measures such as the United Arab Emirates taking control over Socotra while the UAE aided Southern Transitional Council controlling Aden. 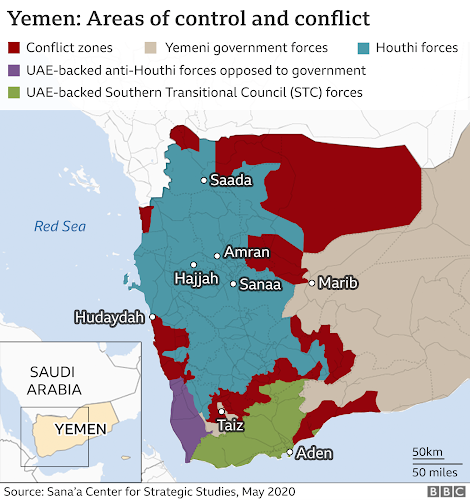 Over the past year, these alliances have fractured. Houthi forces, which still control much of northern and central Yemen, killed Saleh after clashes in December 2017. In southern Yemen, Saudi Arabia and the UAE have backed rival Yemeni groups—the Saudi-supported Yemeni government led by President Abdu Rabbu Mansour Hadi and the UAE-backed Southern Transitional Council (STC). In August 2019, clashes occurred between Yemeni government and STC forces, with the UAE carrying out airstrikes in support of the STC. Across the country, civilians suffer from a lack of basic services, a spiraling economic crisis, abusive local security forces, and broken governance, health, education, and judicial systems.
The United States provided intelligence and logistical support to a coalition led by Saudi Arabia, which launched military operations by using air strikes to restor the former Yemeni government. As a result of this, the international community condemned the Saudi Arabian-led bombing campaing, which has included widespread bombing on civilian areas. With The US providing bombs to aid the Saudi forces and airstrikes in Yemen, in March 2019, the United States Senate passed a resolution to end the US support/actions in this conflict. It was vetoed by President Donald Trump and, in May, the Senate failed to override the vet. This bombing campain has killed or injured more than 17.000 civilians as of March 2019, according to the Yemen Data Project.
Since March 2015, the coalition has conducted numerous indiscriminate and disproportionate airstrikes killing thousands of civilians and hitting civilian structures in violation of the laws of war, using munitions sold by the United States, United Kingdom, and others. Houthi forces have used banned antipersonnel landmines, recruited children, and fired artillery indiscriminately into cities such as Taizz, killing and wounding civilians, and launched indiscriminate ballistic missiles into Saudi Arabia.
Are there any other factors?
In addition to what was mentioned above, which are governmental and political factors, there are also others that contribute to the aggravation of both the humanitarian crisis and the conflict itself, such as:
The United Nations has several agencies that participate directly or indirectly in this humanitarian crisis/conflict; nowadays, there are 8 organizations of the United Nations that operate in more than 300 districts, responsible for the most diverse projects, from WFP, WHO, UNHCR, UNDP, FAO, IOM, UNFPA to UNICEF. In total there are 118 organizations - 32 international NGOs, 78 national and 8 UN, working in allthe three hundred and thirty three districts of Yemen, and according to the United Nations Office for the Coordination of Humanitarian Affairs, (2018), most programs are directed at nutrition and food, water and sanitation.
Although there are places where humanitarian workers have less access to the supplies needed to help the population and less security because of the conflict, for example, attacks on their hospitals, actions continue to take place in order to help the population the best they can as the conflict and the humanitarian crisis worsens.
Article written by: Adriana Santos
* updated data from Worldometers website, 2020
Note: as Yemen's humanitarian crisis is a very complex conflict, keep in mind this is a  summarized article about the issue. If you want to know more about it, please access the links below:
(Sources)
https://www.worldometers.info/world-population/yemen-population/
https://www.ecfr.eu/mena/yemen
https://www.unicef.org/press-releases/yemeni-children-face-deadly-hunger-and-aid-shortages-covid-19-pandemic-spreadshttps://www.britannica.com/place/Yemen/Humanitarian-crisis
http://aljazeera.com/news/middleeast/2014/08/yemen-women-government-quota-2014858395325682.html
https://www.bbc.com/news/world-middle-east-29319423
http://www.britannica.com/place/Yemen/Plant-and-animal-life#ref273076
https://www.unicef.org/emergencies/yemen-crisis
http://www.yemenwater.org/wp-content/uploads/2013/03/Hydrology-of-Yemen.pdf
https://www.europapress.es/internacional/noticia-onu-alerta-yemen-encuentra-borde-gran-crisis-seguridad-alimentaria-20200722230542.html
http://www.smallarmssurvey.org/fileadm/docs/G-Issue-briefs/SAS-Yemen-AVA-IB2-ENG.pdf

October 09, 2020
A firefigther works to put out fires along the road to Jacunda National Forest, near the city of Porto Velho in Brazil's Amazon. (Source: www.euronews.com/reuters)
Post a Comment
Read more